In 2019, surging labor costs and slower revenue growth will likely lead to a decline in corporate profits in both the U.S. and other advanced economies, finds a new study on labor market trends. Conducted by The Conference Board, the analysis says companies in the U.S. that may experience the biggest losses are those employing many blue-collar workers, who now command higher pay due to their scarcity. The research also points out that, because America’s economy has far more available jobs than available workers, companies are changing their recruiting strategies. This includes lowering educational requirements and increasing telecommuting. 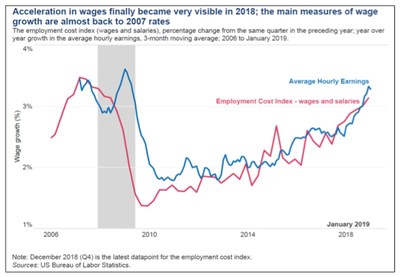 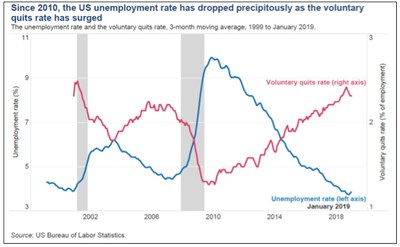 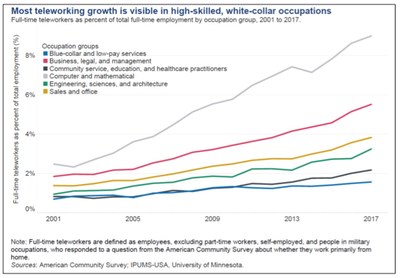 The new report, Global Labor Market Outlook 2019, examines the state and trajectory of labor markets in both the U.S. and around the world. Below is a summary of key trends in the U.S.

#1) Corporate profits likely to decline as wages rapidly increaseCompanies that may see their bottom line suffer the most are those that employ many blue-collar workers, an increasingly scarce yet high-in-demand group. Examples include companies in the manufacturing, food service, and transportation industries. As unemployment rates plummet, wage growth is finally becoming visible, as seen in Chart 1. Moreover, as a result of acute labor shortages for blue-collar workers, their labor costs are rising much faster than for their highly educated white-collar counterparts.

#2) Less wage inequalityAfter decades of rising wage inequality, in recent years the gap has shrunk. Surging wages for blue-collar workers has played the primary role in narrowing the gap.

“Education is the great equalizer, but today’s labor market conditions have put a twist on that narrative,” said Gad Levanon, Chief U.S. Economist at The Conference Board. “Now, with so many people attaining a conventional higher education, companies are having a harder time finding blue-collar workers than white-collar workers. This stark imbalance has helped boost the paychecks of blue-collar workers—and to such an extent that wage inequality has seen a modest decline.”

#3) Companies are lowering their educational requirementsDuring the financial crisis and in the two to three years following it, the share of workers with a BA or some postsecondary education increased among new workers. But since 2012 and 2013, this trend of upskilling has mostly reversed. These results suggest that, in recent years, as the pool of available workers became depleted, employers have hired less qualified workers for a given job opening.

“Those without a high school degree now have record-low unemployment,” said Frank Steemers, an Associate Economist at The Conference Board. “For years, too many of them remained on the sidelines, but companies are now hiring more of them and bringing them up to speed with additional training.”

#4) Growing challenges with worker qualityAs shown in Chart 2, the rate at which people are voluntarily leaving their jobs is growing, while the unemployment rate is declining. These are among the factors that help to explain why, in this tight labor market, labor quality recently ranked as the number-one concern among independent businesses.

“Because this labor market is brimming with job opportunities, employers are struggling to fill open positions and retain workers,” said Elizabeth Crofoot, a Senior Economist at The Conference Board. “To attract quality workers, employers are taking steps to make their jobs more appealing, not only by raising wages, but by enhancing benefits, increasing job flexibility, and providing more meaningful work.”

#5) More employees working from homeHigh-skilled, white-collar occupations account for most of the acceleration in the rise of teleworking, as shown in Chart 3. Among those occupations, there has been a rapid acceleration in telecommuting among computer and mathematical occupations. While employers can use teleworking to broaden the pool of potential workers, labor shortages have been more severe in occupations where teleworking has been less adopted, such as jobs in healthcare, education, and construction.

Access a PDF version of the press release here. Media can request a copy of the report by contacting Joseph DiBlasi: joseph.diblasi@conference-board.org

About The Conference BoardThe Conference Board is the member-driven think tank that delivers trusted insights for what’s ahead. Founded in 1916, we are a non-partisan, not-for-profit entity holding 501 (c) (3) tax-exempt status in the United States. www.conference-board.org.

For more information and to request full report: joseph.diblasi@conference-board.org